The Best Summer(s) Of My Life

I think I already mentioned how awesome and life-changing the summer at CERN was for me. Probably numerous times. I just realized life doesn’t get much cooler than exploring the fabric of the universe and making anti-matter. (And making ice-cream with liquid nitrogen of course :)) It’s like living in a sci-fi movie.

Now when we were leaving CERN last year, a lot of us admitted that this was the best summer of our lives... So far. And this "so far" makes all the difference. The question that is left unanswered after being a Summer Student is: What the hell can I do to keep my life this awesome? 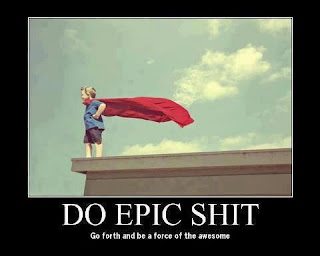 I already have the answer for this summer. In short, Robert, Jakub, and I are driving 16,000 kilometers from Europe to Mongolia in 15 years old car :) It should take about 6 weeks or something. Don’t worry, I’ll share the experience with you just like with CERN :) More info coming soon.

Why Are There Too Many Cool Things I Want To Do?

Let me share one of my first world problems. There's no CERN for me this summer. And it's all my fault. I was looking forward to working on logbook, learning to play the ukulele, and drinking French wine with my friends I haven’t seen for a while… 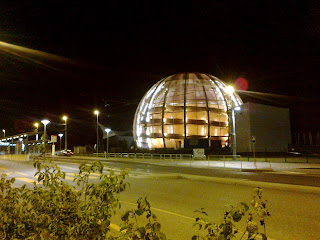 In short, I am staying in Prague because of my internship at McKinsey. The project I work on is longer than expected and I ended up choosing staying here. That means I will work on my thesis later, even though it probably means in Prague and not at CERN.

Why do I do that? The thing is I feel I wasn't born to be a developer. I would learn a lot at CERN, but it would be mostly being a better coder. At McKinsey, I am learning to drive change. So that I can run the world one day. (Muahahahahaha :))

And then I'm generally bad at doing one thing after another, so I'm trying to break the pattern here and finish one thing and then focus completely on the next one. As I have plans for this summer I cannot postpone, I will work on my thesis in the fall.

Sofia in Prague aka “Oh, This Is Beautiful – Picture Time!”

A couple of weeks ago, my beloved and crazy Sofia announced me she’s coming to Prague in the beginning of June. Luckily enough, the time worked for me too so we knew another great adventure was ahead.

Sofia forwarded me her flight ticket and we exchanged phone numbers and then we didn’t have time to talk at all. So on the day she was supposed to come I woke up, hangover, and headed to the airport to pick her up, feeling very unsure about whether she’s actually on her way or not. And then she was there :)

We had a blast. It felt like we met yesterday but there was just so much more to share from the last year. I am so happy to have met Sofia and keep being inspired by her :) This young lady not only is killing her studies in the Netherlands but also has a startup with a product that sounds like from Star Trek to me. Ask her directly for more info. So for now she’s staying in the Netherlands and will keep doing cool stuff and changing the world. 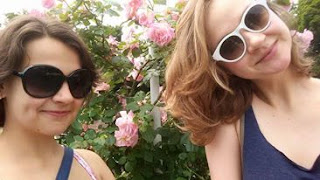 Then we shared a ton of personal stuff, dreams, plans, stories, experiences… We also ended up walking around the Prague castle and the Old Town and taking a lot of naps :) Sofia invited her friend Paul to Prague who brought his son with him and the guys shared some more touristy information about Prague with us and also made us go to see some art. And of course we ate a lot of dumplings and drank a lot of Czech beer :) And took way too many selfies with Sofia :)

I felt like after a week of holidays after this weekend spent in my own city. Thank you guys for everything. Hope to see you in Geneva or the Netherlands!

The openlab 2014 video is finally finished! You can have a look at all of us trying to be serious :) It's great to see almost all the guys again. It's like time travel :)

Plus if you're touched by the message of the video and want to apply, go ahead.

Because I got a number of emails asking for some advice regarding the application for the CERN Summer Student and openlab programs, I concluded it would be nice to put a summary here.

So I asked my dear friends from openlab for advice and we came up with these key points:

1 - Find what you would like to work on at CERN, google what technologies they use and emphasize your knowledge of them in your CV. It might be good to be interested in some of the Oracle technologies, since it is one of the companies that fund the project.

2 - Include the right keywords: javascript, Hadoop, python, what you know and want to use.

3 - Have publicly available code on github. As much as possible. It's a great way to link your skills to experience and work you've done.

You can also find some information in Czech on Peter's blog.

If you have a more specific question, shoot me an email. Now you go and apply :)

COMPASS: Common Muon and Proton Apparatus for Structure and Spectroscopy

What the COMPASS experiment is actually? I barely remember the name the abbreviation stands for... But I know some basic stuff I can share. I doubt I will ever understand the physics behind it anyway :)

So COMPASS is an experiment at the second largest working particle accelerator on Earth: the SPS (Super Proton Synchrotron) from 1976. The experiment is in Prevessin, which is France and a couple of kilometers from Meyrin, the main CERN site in Switzerland. So you pay in euros and the food is maybe a little better :)

COMPASS investigates the way quarks and gluons interact to create particles like protons and neutrons, which you actually may have heard of in high school. So we collide some small thingies called muons, supposedly something like heavy electrons. I might describe the magic behind how it's done when I actually know more about it...

There are about 300 people from different countries working on this. My group consist of a bunch of Czech guys from CTU and Charles University. Most of us do IT but there are also some physicists. We are known as the Czech mafia because the guys keep wearing black coats and hats :)

Luckily enough, I was able to see the experiment this week. It is not accessible when the beam is on, so we were pretty lucky to get to see everything. You can have a look at how it looks like.

What Do I Work On?

I thought I would write something meaningful and cool about COMPASS, what it is, etc. But I am super tired after trying to understand code written by a very creative French physicist 12 years ago. Some parts of it are really very... surprising and unorthodox. Or whatever you call it.

So what do I do here now? I am rewriting COMPASS logbook to something that would look more like from the 21st century. The logbook is on-line monitoring tool and kind of a journal for anything that happens at the experiment. There is information about every shift, the detectors settings, notes,... So some php and MySQL stuff.

The funny thing is after I finish with it, there will be people using it 24/7 for a decade or something. I think I will make it pink and include some Hello Kitty pictures to improve the user experience :) Oh, I almost forgot, the old logbook is in Comic Sans. I think I will need to keep it at least as an optional setting :)

So... I am back here :) It didn't even take too long. So how did I end up at CERN? I met a few cool guys from my home department during the summer here. Then we went out in Prague again and I ended up joining the team to work on my master thesis at COMPASS. I will write a separate post about what it is.
How does it work? I will go to CERN several times during the next year, probably for a few weeks at a time. I will also work on the project in Prague of course. I will recode the COMPASS logbook, which is an ancient piece of on-line monitoring system, written by a physicist nicknamed "the monster". Sounds like fun :)

My classmate (and a new roommate) Martinek and I arrived yesterday. It felt a little surreal to be back, see the same old familiar places without the familiar people... Anyway, I managed to get a new
CERN card, which is a big deal of course, because there's "CERN" written on it :) I didn't even need to take a new picture, which was nice. So here it is. More information coming soon.

I just gathered a few of our first world problems. I hope it will remind you of CERN :) 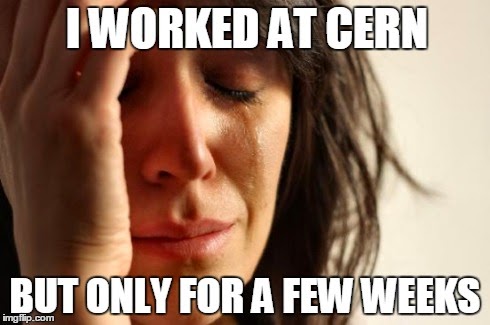 It felt a little surreal to see the guys from CERN at the train station in Munich. So after everybody left Geneva, we wanted to see each other again soon. We concluded that the best place to meet is Eva’s place, because we can go to Oktoberfest!

Eva managed to fit almost all of us to her place, bought a lot of German beer and sausages, and took us to some bars, Oktoberfest, and BMW. I missed the rest of the weekend because of a stupid flu… I need to take better care of myself in the future.

So we went to Oktoberfest to drink some German beer and stare at people wearing funny clothes. Fortunately, Eva had two dirndls (the traditional dress) so I could wear one too! It really made me sit straight :) It was so cool :) We arrived too late to go to a beer tent, as they were full by 9 am, so we took a table outside and had some fun. Actually we didn't do not too much crazy stuff this time.

So the next day we went to BMW to see some shiny expensive cars. It was pretty interesting but I felt awful so I decided to leave in the evening. The college life is too exhausting sometimes… I am really happy we could see each other and I hope we will meet again soon. Thank you for hosting this, Eva!